Virat Kohli is an Indian international cricketer and former captain of the Indian national cricket team. He plays for Delhi in domestic cricket and as a right-handed batsman for Royal Challengers Bangalore in the Indian Premier League. Kohli made his Test debut in 2011. He reached the number one spot in the ICC rankings for ODI batsmen for the first time in 2013. He has won the Man of the Tournament twice in the ICC World Twenty20 (in 2014 and 2016). He also holds the world record for the fastest 23,000 international career runs. 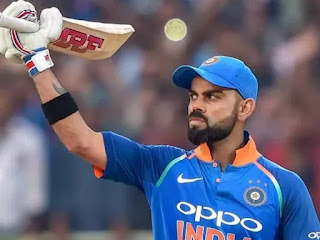 Virat Kohli was born on 05 November 1988, in Delhi, India, to Prem Kohli and Saroj Kohli. His father Prem Kohli was a criminal lawyer who died in 2006 and his mother Saroj Kohli is a housewife. He was bred in Delhi's Uttam Nagar and he went to Vishal Bharti Public School for his schooling and Saviour Convent. Kohli's father was bedridden for a month and died on 18 December 2006 from cardiac arrest.

Kohli was part of the first batch of the newly created West Delhi Cricket Academy (1998) and received training under Rajkumar Sharma. Virat made his cricket debut with the Delhi Under-15 team, in October 2002, in the 2002-03 Polly Umrigar Trophy and lead the team to the next trophy. Later on, he was selected in the Delhi Under-17 team for the 2003-04 Vijay Merchant Trophy where he scored the highest number of runs.

When he turned 18, Kohli made his first-class debut for Delhi against Tamil Nadu wherein he scored 10 runs. In July 2006, he made his debut in the Under-19 team during India's tour of England. India won both ODI and Test series. Kohli made his T20 debut next year and emerged as the highest run-scorer in the Inter-State T20 Championship with 179 runs.

The year 2008 was a life-changing year for Kohli. Firstly, he captained the Under-19 Cricket World Cup-winning team. Second, he was bought by RCB for $30,000 on a youth contract for IPL and he also made his international debut in the same year.

After recovering from his injury, Kohli replaced Goutam Gambhir for the tri-series in Sri Lanka and played at no. 4 in the 2009 ICC Champions Trophy as Yuvraj Singh was suffering from an injury.

For the tri-nation ODI tournament in Bangladesh in 2010, Tendulkar was rested, thereby enabling Kohli to play in each match. Due to his wonderful performance in Bangladesh, he was praised by the then captain MS Dhoni.

Kohli was part of the World Cup-winning team in 2011 and became the first Indian batsman to score a century on his World Cup debut.

In his Test debut, he played against West Indies at Kingston and his performance was not good in the series. His total runs were only 76 for five innings. But soon he saw his abilities and became the first Indian batsman to score a century against Pakistan in a World Cup match in 2015.

Kohli became the first batsman to score six double hundreds as a captain, during the 3-match Test series against Sri Lanka at home in 2017. In The same year, he scored a total of 2818 international runs which was the third-highest by an Indian in a calendar year and the highest ever by an Indian player.

He ranked no. 1 in the ICC Test rankings, in August 2018. With this, he became the seventh Indian batter to achieve this milestone. He became the first Indian, first captain and tenth overall to hit three successive centuries in ODIs in October 2018.

For the tri-series in Zimbabwe in 2010, Kohli was made vice-captain and Raina was named captain while. In this series, Kohli emerged as the fastest Indian batsman to reach 1,000 ODI runs.

For the 2012 Asia Cup, Kohli was appointed as vice-captain due to his excellent performance in Australia. In 2013, Kohli captained the West Indies tri-series winning team after Dhoni injured himself during the match and also captained a five-match ODI tour of Zimbabwe, which was won by India by 5-0.

In the 2014 ICC World T20 Competition, Kohli was named vice-captain, where India emerged as the runner ups and Kohli as Man of the Tournament as he amassed 319 runs in the tournament. Kohli captained India in the five-match ODI series against Sri Lanka which India won by 5-0. It was the fourth whitewash under in India's ODI history and the second in his captaincy.

Kohli led India in the first Test of the Australian tour which was his test captaincy debut and scored 115 runs in the first innings, and become the fourth Indian to score a hundred on his test captaincy debut. M.S.Dhoni announced his retirement from Test cricket at the conclusion of the third match between India and Australia, and now Virat Kohli was appointed as the full-time Test captain ahead of the fourth Test at Sydney, where Kohli scored 147 in the first innings and became the first batter in the Test cricket history to score three hundred in his first three innings as Test captain. For the 2016 World Twenty20, he was named as captain of the 'Team of the Tournament' by the ICC.

In the 2017 ICC Champions Trophy, Kohli captained India, in which India entered the finals but lost to Pakistan. He also captained the 2019 Cricket World Cup where India failed to reach the finals after losing the semi-final match against New Zealand. India's first whitewash under Kohli's captaincy was India's tour of New Zealand in 2020. He also captained the Royal challengers Bangalore IPL team, for 8 seasons but failed to win a trophy.

Other honours and Awards