Sundar Pichai is the present Chief Executive Officer (CEO) of the search engine Google. He is an India-born world-class figure. The total salary of Sundar Pichai was around US$1,881,066 in 2018. 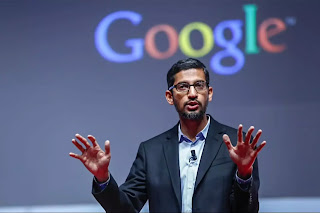 Sundar Pichai was born on 10 June 1972, in Madurai, Tamil Nadu, India, to Regunatha Pichai and Lakshmi. Sundar Pichai completed his schooling in Jawahar Vidyalaya, which is located in Ashok Nagar, Chennai and completed Class XII from Vana Vani school. He received his B.Tech degree from IIT Kharagpur and completed his Master of Science (MS)from Stanford University. pichai has also done his MBA from the Wharton School of the University of Pennsylvania.

When Sundar Pichai completed his B.Tech in Metallurgical Engineering from IIT Kharagpur, he earned a scholarship to study materials science and semiconductor physics from Stanford University, USA. In starting of his career, he worked as an engineer and product manager at a semiconductor maker (Applied materials) in Silicon Valley, USA. After completing his MBA from Wharton in 2002, he joined McKinsey & Company as a consultant and in 2004, he finally joined Google.

Some More About Sundar Pichai

Sundar played an important role in the final launching of Google Chrome, in 2008, when he convinced the co-founders of Google, Sergey Brin, and Larry Page to launch Google’s browser. Soon, Google Chrome became the world's No. 1 browser and surpassed competitors such as Firefox and Internet Explorer.

After the success of chrome, Sundar Pichai became an internationally famous figure. Finally, after 11 years, since he joined Google; he was selected as the next CEO of Google on 10 August 2015. Alphabet Inc. was formed in 2015 as Google’s parent company. Sundar Pichai was awarded 273,328 shares of Google's holding company Alphabet in Feb.2016. Finally, on 03 December 2019, he became the CEO of Alphabet Inc.