Sidharth Malhotra is a Bollywood actor and modeling star. Sidharth debuted in Bollywood as the Student of the year movie in 2012. This was Karan Johar's movie. It also has Debutants Alia Bhatt and Varun Dhawan. His performance in his debut movie received unanimous appreciation and since then the actor has established himself to be one of the most successful actors of the new generation. So much so that Saibal Chatterjee of NDTV compared his screen presence to the legendary Amitabh Bachchan. He has appeared in movies such as Hasee Toh Phasee (2014), Ek Villain (2014), and Kapoor & Sons (2016). 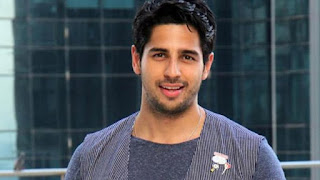 Sidharth Malhotra was born on 16th January 1985, in Delhi to Sunil Malhotra and Rimma Malhotra. He belongs to a Punjabi family. Sunil Malhotra is a former Indian Merchant Navy employee and Rimma Malhotra is a housewife. Sidharth is their second child and has an elder brother, Harshad Malhotra. Harshad works in the banking industry. He entered in Delhi's Don Bosco School and Birla Vidya Niketan and completed his schooling. later on, he went to Bhagat Singh College to pursue his higher studies.

In his college days, Sidharth started taking up modeling assignments in order to earn some extra money. Soon after, he was spotted by a model coordinator after which he took up modeling as a full-time career. The actor won the Mr. Gujarat pageant in 2007, Sidharth was the second runner-up in the Gladrags Mega-model and Manhunt 2007 and was also declared Gladrags Face of the Year 2009.

Sidharth won a few beauty pageants and after this, he started modeling for big brands and walked the ramp for famous designers including Roberto Cavalli. To walk at various fashion shows, Sidharth traveled to a lot of places including New York, Milan, and Paris. Due to his performances, he received a few movie offers, and one of his contracts was with Adlabs for a project headed by director Anubhav Sinha, however, the film was shelved.

Sidharth Malhotra was in a relationship with 'Natalie' a South African model till he was shooting for his first film, after which the couple broke up. He then dated a Brazilian model 'Izabelle Leite'.

The acting was never the first choice of career for sid, who started modeling at the age of 18. After a successful modeling career, Sidharth realized that he wanted to pursue his career in acting and took up a role in the hit TV serial Prithviraj Chauhan, along with actor Rajat Tokas. After signing a contract with Anubhav Sinha's project, which was shelved mid-way, the actor, in a bid to learn more about the art of film-making, started to work as an assistant director. The actor was supposed to pair opposite Priyanka Chopra in the film Fashion (2008), but could not take up the project due to the contract with Gladrags.

Later on, Sidharth worked as an assistant director in Karan Johar's(director,) film My Name Is Khan in 2010 and this helped him bag a role in Johar's next venture, Student Of The Year. His portrayal of Abhimanyu Singh won the hearts of many and he also received several awards for his performance. After this hit film debut, Sidharth Malhotra got a role in Hasee Toh Phasee, directed by Vinil Mathew, in 2014 opposite Parineeti Chopra. His performance as an aspiring businessman in the movie won him praise and was well-received by critics. Later in 2014, he starred in Mohit Suri's romantic thriller Ek Villain, opposite Shraddha Kapoor, where he played the role of a hardened criminal.

In 2015, Sidharth was cast in the remake of the Hollywood film Warrior titled Brothers, which was directed by Karan Malhotra, alongside Akshay Kumar. In order to prepare for the role, Siddharth underwent proper training in martial arts. The story of a dysfunctional family, Shakun Batra's Kapoor & Sons, which was released in 2016, co-starring Alia Bhatt and Fawad Khan, garnered praises, and Malhotra's performance was also well-received.

He was in the next project alongside Katrina Kaif in Nitya Mehra's 2016 release Baar Baar Dekho, which was a box office disaster. In 2017, the actor was seen in the movies A Gentleman and Ittefaq. In 2019, he worked in many films including Marjaavaan, directed by Milap Milan Zaveri. He gained praise for starring as Vikram Batra in the war film Shershaah (2021). His other notable releases include Thank God (2022), Yodha (2022), and Mission Majnu (2023).