Pusarla Venkata Sindhu is an Indian badminton player. She is Considered one of India's most successful sportspersons. P.V. Sindhu has won medals at various tournaments such as the Olympics and on the BWF circuit. In 2019, she won gold at World Championship. Sindhu is the first and only Indian to become the badminton world champion and only the second individual athlete from India to win two consecutive medals at the Olympic Games. In April 2017, She rose to a career-high world ranking of no. 2. 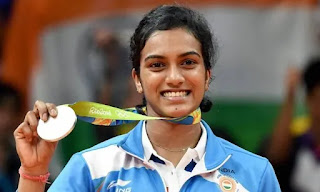 Pusarla Venkata Sindhu was born on 05 July 1995, in Hyderabad, Andhra Pradesh. She was brought up in Hyderabad, India to P. V. Ramana and P. Vijaya. Her father Ramana, an employee of the Indian Railways, was born in Nirmal, Telangana while Vijaya hails from Vijayawada, Andhra Pradesh. Both her parents have been national-level volleyball players. Her father, Ramana, who was a member of the Indian volleyball team that won the bronze medal in the 1986 Seoul Asian Games, received the Arjuna Award in 2000 for his contribution to the sport.

She was educated at Auxilium High School, Hyderabad, and at St. Ann's College for Women, Hyderabad. Though her parents played professional volleyball, she chose badminton over it because she drew inspiration from the success of Pullela Gopichand, 2001 All England Open Badminton Champion. She eventually started playing badminton at the age of eight. She first learned the basics of the sport with the guidance of Mehboob Ali at the badminton courts of the Indian Railway Institute of Signal Engineering and Telecommunications in Secunderabad. Soon after, she joined Pullela Gopichand's Gopichand Badminton Academy.

Her biggest moment came in the year 2016 when she went on to become the youngest and the first female athlete from India to win a silver medal at Rio Olympics. She was graced with India's 4th highest civilian honor, The Padma Shri Award, later that year.

Since July 2013, PV Sindhu has been employed with Bharat Petroleum Corporation Limited (BPCL) as an Assistant Sports Manager in Hyderabad Office. In 2016, after winning a silver medal at the Rio Olympics, Bharat Petroleum Corporation Limited (BPCL) promoted her to Deputy Sports Manager. She was also appointed as the first brand ambassador of Bridgestone India. In the 2018 Commonwealth Games opening ceremony, Sindhu was the flag bearer for India.

Her hobbies are Watching movies and Doing Yoga. Her favourite actors are Mahesh Babu & Prabhas (Tollywood) and Hrithik Roshan & Ranveer Singh (Bollywood). As per reports, Sindhu is the second Sportsperson after Indian Cricket Captain Virat Kohli in terms of brand endorsements. She charges brands between US$140,000-US$180,000 for a single day. She has endorsed deals with several brands such as Flipkart, Myntra, Stayfree, Nokia, Panasonic, Bank of Baroda, Central Reserve Police Force, Vizag Steel, JBL, etc.