Narendra Damodardas Modi is an Indian politician and is serving as Prime Minister of India at the present time. He is appointed as PM of the country for the second term in 2019. He is the second most famous leader in the world after Barak Obama. 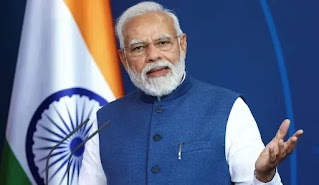 Narendra Modi was born into a family of an oil-pressing community, which is considered the Other Backward Class (OBC) in India. He was born on 17 September 1950 (Sunday), in Vadnagar, Bombay State (Now, Gujarat), India, to Damodardas Mulchand Modi and Heeraben. In childhood, Modi wanted to join the Indian Army and tried to get himself enrolled in a Sainik School, but as his family was financially weak, he couldn't get admission to the Sainik School.

Narendra left his house, when he was only 17, and travelled to different parts of India. Young Narendra Modi often lent his hands to his father's tea stall at the Vadnagar Railway Station, Gujarat. In 1989, his father died of Bone Cancer. At that time, Modi was on Kailash Manasarovar Yatra.

Modi was introduced to RSS (Rashtriya Swayamsevak Sangh), When he was eight years old and he started attending its (training sessions), in which Modi met Lakshmanrao Inamdar (Vakil Saheb). Lakshamanrao inducted Modi as a balswayamsevak (junior cadet) in the RSS and became his political mentor. When he joined Rashtriya Swayamsevak Sangh (RSS), he was assigned to mop the floor at the RSS headquarters in Ahmedabad. Narendra Modi was engaged to Jashodaben at a very young age and was married when he was 18 and she was only 17.

Some other things about Narendra Modi

Salary (as the Prime Minister of India) 280,000/ Month Other Allowances

Some sharp Facts about Narendra Modi