Pilavullakandi Thekkeparambil Usha (P. T. Usha) is a retired Indian field and track athlete. She has been associated with Indian athletics since 1979. She is also known as the "Queen of Indian track and field". She is one of the most famous and successful female athletes and this fast-running girl had no match. 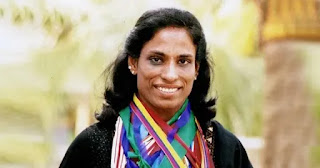 P. T. Usha was born on 27 June 1964 in Kuttali, Kerala, India, to E.P.M. Paithal and T. V. Lakshmi. P. T. Usha was a weak child due to poor health in childhood. Her health improved during her primary school days, and people started seeing her image of a great athlete in him. Since her childhood, she was very interested in athletics and therefore she took admission to the ‘Sports School’ of Kannurat, at the age of 12. In her sports school, she was most supported by his instructor Shri. O. Found P. Nabiarka. In her Inter-State match held in Kerala in 1978, she won 3 golds.

P. T. Usha started her international career as an athlete at age of 16, in 1980, with the Pakistan Open National Meet in Karachi and named 4 gold medals for India. After this wonderful start, P. T. Usha participated in the ‘World Junior Invitation Meet’, in 1982, and won the gold medal in the 200-meter race and the bronze medal in the 100-meter race. In the next year, in the ‘Asian Track and Field Championships’ held in Kuwait, in 1983, PT Usha set a new record in the 400 meters race and won the gold.

P. T. Usha started her preparation for the Olympics in 1984 and in the 1984 Olympics in Los Angeles, she finished the 400 meters race in the first round of the semi-finals, but she lost by a 1/100 margin in the finals to win the Bronze medal. Her race completion time was 55.42 seconds. The match was full of thrills, reminding a race of ‘Milkha Singh’ in 1960. It was the first time in the history of India when a female athlete reached the final round of the Olympics. Her time (55.42 seconds) for the 400m race is still a national record in India’s event.

P. T. Usha participated in the 'Asian Track and Field Championships' which took place in Jakarta, Indonesia, in 1985. In this championship, she won 5 gold and 1 bronze medal. P. T. Usha took part in the 200 m, 400 m, 400 m hurdles, and 4x400 m relay race, in the 10th Asian Games, which took place in Seoul, in 1986, and was victorious and the gold medal was won by India Given. Winning so many medals by the same athlete in a single event was a record in itself, which was done by her.

P.T. Usha participated in the Olympic Games, which were held in Seoul, in 1988, but just before the Game, she suffered a leg injury and with strong courage, she took part in that game for his country in the same condition. Unfortunately, she didn't get a single win. P.T. Usha went to the Asian Track Federation Meet held in Delhi with tremendous preparation, in 1989, and she won 4 gold medals and 2 silver medals there. After this PT Usha wanted to announce his retirement, but everyone asked him to play his last innings. After this, she participated in the ‘Beijing Asian Games’ in 1990 and won three silver medals.

After playing games in Beijing, PT Usha retired from athletics in 1990, but she surprisingly returned to athletics at the age of 34, in 1998. After returning to athletics she participated in the ‘Asian Track Federation Meet’ held in Fukuoka, Japan,400-meter and won the Bronze medal in the 200-meter and 400-meter races.

When she turned 34, PT Usha improved his own timing in the 200-meter race and set a new national record. In 2000, PT Usha took his full-time retirement from athletics. The reason for her retirement was knee pain, but her ‘Usha Academy’ started the work of producing Indian Athletes.

For her successful career in sports, P. T. Usha is honored with many awards and honors. Some notable awards are:

For her efforts and outstanding service towards athletics, as well as for raising the name of the nation in the world, PT Usha was honored with 'Padma Shri', in 1985, which is the fourth major honor of the country and was also awarded by ‘Arjuna Award’ in 1984.

PT Usha married V. Srinivasa, an inspector with Central Industry Security Force in 1991. The couple was blessed with a boy, Ujjwal Srinivasa in 1992. In the present time (2022) PT Usha runs Athletes School in Kerala, where she trains young athletes.