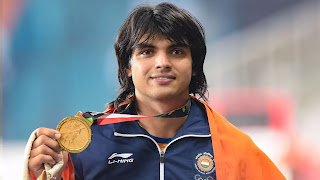 Neeraj Chopra was born on 24 December 1997, in Khandra village, Panipat district, Haryana. He belongs to a Ror family,. which is largely involved in agriculture. He has two sisters. He graduated from Dayanand Anglo-Vedic College in Chandigarh, and as of 2021, is pursuing a Bachelor of Arts from Lovely Professional University in Jalandhar, Punjab.

From an early age, Neeraj was teased by children because of childhood obesity. Due to this Chopra's father enrolled him in a gymnasium at Madlauda. He was later enrolled in a gym in Panipat. While playing at Shivaji stadium in Panipat, he saw some professional javelin throwers and began participating himself.

Neeraj visited the nearby Panipat Sports Authority of India (SAI) centre, where javelin thrower Jaiveer Choudhary recognised his talent in the winter of 2010. Observing Chopra's ability to achieve a 40-metre throw without training, Choudhary became his first coach. Chopra learned the basics of the sport from Choudhary and a few more experienced athletes. Soon, he won his first medal, a bronze in the district championships, and then persuaded his family to allow him to live in Panipat while developing his abilities.

Neeraj took training from Choudhary for a year, and then he was admitted to the Tau Devi Lal Sports Complex in Panchkula, at age of 13. There, he trained under coach Naseem Ahmad, who was a running coach. Naseem Ahmad made him train in long-distance running along with the javelin throw. As Panchkula lacked a specialized javelin coach, he and fellow javelin thrower Parminder Singh downloaded videos of the Czech champion Jan Zelezny and attempted to copy his style. Chopra typically achieved throws of around 55 meters, when he was in Panchkula and soon increased his range, and in the National Junior Athletics Championships in Lucknow on 27 October 2012, Neeraj won gold with a new national record throw of 68.40 meters.

In 2015, throwing 81.04 meters in 2015 All India Inter-University Athletics meet, Neeraj Chopra broke the previous world record in the junior category.

In the 2015 National Games in Kerala, Chopra finished fifth and received a callback for the national-level training camp as a result. After this, he left Panchkula in 2016 to train at Netaji Subhas National Institute of Sports, Patiala. According to him, training with national-level javelin throwers at a national sports camp boosted his morale. At the national sports camp, Chopra was also assigned his first dedicated javelin coach, 2010 Commonwealth Games bronze medalist Kashinath Naik, but found Naik's training regimen too difficult and resumed training on his own after a month and a half.

Chopra achieved a new personal best, at the 2016 South Asian Games, during the athletics finals in Guwahati on 9 February 2016, winning gold with a throw of 82.23 meters. That same month he began training under Australian coach Gary Calvert. By winning a gold medal in the 2016 IAAF World U20 Championships in Bydgoszcz, Poland, Chopra set a world junior record of 86.48 m, becoming the first Indian athlete to achieve a world record, at the same time setting a new national record, but Chopra failed to qualify for the 2016 Summer Olympics as the cut-off date had been 11 July, the week before the U20 championships. Due to a back injury sustained in April 2016, his preparations for Rio had also been hampered. This injury had noticeably affected his performance in competition.

Indian Army was largely impressed with Chopra's performance at the South Asian Games and his future potential and offered him a direct appointment as a Junior Commissioned Officer (JCO) in the Rajputana Rifles with the rank of Naib Subedar. In September 2016, he left the Netaji Subhas National Institute of Sports to train at the Sports Authority of India center in Bangalore and was formally inducted as a JCO in December 2016. He also received extended leave to continue his training.

In the 2017 Asian Athletics championships, Chopra received a gold medal, with a throw of 85.23 meters. After this, he went to London in August 2017 for the World Championships but was eliminated before reaching the finals. On 24 August, in the finals of the Zurich Diamond League, Chopra suffered a significant groin injury. Sustaining the injury during his third attempted throw, in which he attained a distance of 83.39 meters; owing to the injury, he fouled his fourth attempt and skipped his last two allowed attempts. His first throw of 83.80 meters gave him a seventh-place finish. As a result, he withdrew from the competition for the remainder of 2017. After recovering from his injury, Chopra spent a month at the Joint Services Wing sports institute in Vijayanagar. Then after, he left for Offenburg, Germany in November to train for three months with Werner Daniels, whom he had briefly worked with before the 2017 World Championship. During his stay in Offenburg, Chopra focused on strength training and honed his technique with Daniels' guidance.

In 2018, Neeraj Chopra became the first Indian athlete to win the Javelin throw at the Commonwealth Games, with a throw of 86.47 meters. He again broke the national record, in May 2018, at the Doha Diamond League with a throw of 87.43 meters.

Chopra made his debut at the Asian Games representing India, in August 2018. He was also the flag-bearer for the Indian contingent during the 2018 Asian Games Parade of Nations. On 27 August 2018, he threw a distance of 88.06 meters to win India's first gold in the Men's javelin throw at the 2018 Asian Games and bettered his own Indian national record. Chopra was the only track and field athlete that year to be recommended by the Athletics Federation of India for the country's highest sports award, the "Major Dhyanchand Khel Ratna", but was awarded the Arjuna Award in September 2018. Soon after, he was rewarded by the army with an out-of-turn promotion to subedar in November.

In preparation for the 2020 Tokyo Olympics, subsequently postponed to 2021, Chopra trained with guidance from his German coach Uwe Hohn, biomechanics expert Klaus Bartonietz and physiotherapist Ishaan Marwaha. During 2018 – 2019, Hohn improved Chopra's throwing technique, which earlier was "wild" according to Hohn.

On 4 August 2021, Chopra represented India in the Japan National Stadium and topped his qualifying group for entry to the final with a throw of 86.65 meters. In the finals, Chopra won the gold medal in the final on 7 August 2021, with a throw of 87.58 meters in his second attempt, becoming the first Indian Olympian to win a gold medal in athletics and the first post-independence Indian Olympic medalist in athletics. Chopra's medal gave India a final total of seven medals at the Games. As a result of his performance in Tokyo, Chopra became the second-ranked athlete internationally in the men's javelin throw. Chopra also became the second Indian to win an individual Olympic gold medal after Abhinav Bindra (gold medalist in men's 10 m air rifle in the 2008 Summer Olympics).

Neeraj Chopra dedicated his win to sprinters Milkha Singh and P. T. Usha, both former Olympians from India. According to some historians, Chopra is the first Olympic medalist in track and field for India, but both the International Olympic Committee and Indian Olympic Association officially recognize 'Norman Pritchard' to have been the first Indian track and field Olympic medalist, having competed in the 1900 Paris Olympics, even though India was under British rule at that time.

After his return home, Chopra was briefly admitted to a Panipat hospital after developing a fever, which forced him to skip a number of celebrations. On 26 August Chopra said he was cutting his 2021 season short to rest and prepare for the 2022 World Championships, Asian Games, and Commonwealth Games. He resumed his training in October 2021.

Neeraj Chopra is not married yet and he lives with his parents. He is single in the present time (2022). Chopra's annual income is INR 5.5 Crore rupees and his net worth is INR 22.5 Crore Rupees.

"When The Desire For Success Does Not Let You Sleep When There Is Nothing Better Than Hard Work When You Do Not Get Tired After Working Continuously, Understand That You Are Going To Create A New History Of Success."