Abraham Lincoln was an American lawyer and statesman. He served as the 16th President of the United States and was the most influential president. He led the country during the American Civil War and succeeded in preserving the Union, bolstering the federal government, abolishing slavery, and modernizing the U.S. economy. He was fondly called 'Honest Abe' and 'Father Abraham'. 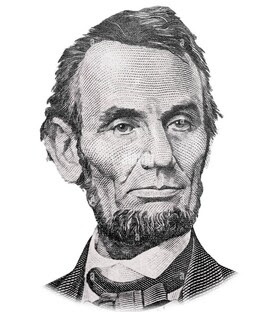 Abraham Lincoln was born on 12 February, 1809, in Kentucky to Thomas Lincoln and Nancy Lincoln. He was the second child the oldest child of his parents. Abraham was a descendant of Samuel Lincoln, an Englishman, who in 1638, migrated from Hingham, Norfolk, to its namesake, Hingham, Massachusetts. The family then migrated west, passing through New Jersey, Pennsylvania, and Virginia. Abraham's paternal grandparents, his namesake Captain Abraham Lincoln and Bathsheba (Lincoln's grandmother), moved the family from Virginia to Jefferson County, Kentucky. The captain was killed in 1786, in an Indian raid. Abraham's father, Thomas Lincoln witnessed the attack. Thomas then worked at odd jobs in Kentucky and Tennessee, till early 1800s.

Heritage of Abraham's mother is not clearly known. Abraham's parents, Nancy and Thomas married on 12 June 1806, in Washington County, and moved to Elizabethtown, Kentucky. The couple had four children- Robert, Sarah, Abraham, and Thomas.

From a very young age, Lincoln took a keen interest in studies. For the most part, he was self-educated. Even though both his parents were illiterate and unschooled, they wanted the best for their child. His parents moved to Elizabethtown, Kentucky.

Abraham's father, Thomas Lincoln bought/ leased farms in Kentucky before losing all but 200 acres, of his land in court disputes over property titles. Lincoln's family in 1816, moved to Indiana where the land surveys and titles were more reliable. In 1860, Abraham realized that the family's move to Indiana was "partly on account of slavery", but mainly due to land title difficulties. Lincoln's father also worked as a farmer, and cabinetmaker during his stay in Kentucky and Indiana. Abraham's parents were members of a Separate Baptists church, which forbade alcohol, slavery and dancing.

Nancy Lincoln succumbed to milk sickness, on 05 October, 1818. Ten years later, on 20 January 1828, Sarah (first child of Thomas and Nancy) died while giving birth to a stillborn son. After his mother's death, Abraham's father, Thomas married Sarah Bush Johnston, on 02 December, 1819. Sarah Bush Johnston was a widow from Elizabethtown, Kentucky, with three children of her own. Abraham became close to his stepmother and called her "Mother".

Abraham Lincoln was largely self-educated. His formal schooling was from itinerant teachers, at the age of 7. In Indiana, Abraham went to school sporadically due to farm chores, for a total of less than 12 months in aggregate by the age of 15. He also has an interest of learning and from his schooling, he developed his interest.

To support his family, Lincoln worked many odd jobs such as being a shopkeeper and a postmaster. Lincoln began his political career in 1834 and was elected to the Illinois state legislature as a member of the Whig Party, at at a age of 25.

This was the period when he decided to become a lawyer, teaching himself the law by reading William Blackstone's Commentaries on the Laws of England. He was admitted to the bar in 1837 and he moved to Springfield, Illinois, where he began to practice in the John T. Stuart law firm. One of the main reasons Lincoln entered politics was against slavery, which had spread to different regions of the United States. He wanted to develop and expand the US. His main focus was on commerce rather than agriculture. Before Lincoln became President, he served in the Illinois State legislature for many terms. Later, he worked as a lawyer under John T. Stuart. There, he earned the name ' Honest Abe'. In 1846, he competed for a seat in the US Congress, which he won. Lincoln served as a congressman for one whole term. For his best election, he delivered a speech in Peoria, in which he addressed his abhorrence for slavery and talked about the equality of rights amongst people.

For his candidacy, he spoke about the anti-slavery and free soil ideologies. In 1858, Lincoln was chosen for the US Senate. During this time began the famous Lincoln-Douglas debates, also known as The Great Debates of 1858'. It was a series of seven debates, mostly revolving around the issues of slavery. The year 1860 was a quite prosperous year for Lincoln. He fought for the seat of the President of the United States.

Lincoln finally won the 1860 elections and became the president in 1861. He gained lots of support from the North and the West, But at that time, Southern states did not want Lincoln to be the president. They were against his policies. The South decided to remove itself from the Union and formed a separate nation called the Confederate States of America. Lincoln refused to accept the Confederacy and declared it illegal. He still stood strongly for free-soil and slave-free states. This situation created the most deadly conflict in America's history. In 1861, just a month after Lincoln joined office, the civil war started. He took the help of the Northern state armies to defeat the south. It soon turned into a bloody war which lasted for four years and millions of Americans lost their lives, but Lincoln still managed to hold the country together.

In 1863, he announced the Emancipation Proclamation, and order that freed the slaves in the Confederate States. It also created a thirteenth Amendment, which released all slaves in United States in the following years. Lincoln spent months preparing the army and the country for emancipation. In a short time, around three million slaves were released from the Confederate regions. Those slaves were then absorbed into the military according to the policy that Lincoln had established. On 09 April 1865, the civil war finally ended. During the war, many Southern states were heavily damaged. Lincoln wanted to help these states but, sadly, he did not live long enough to see the country rebuilt itself.

Lincoln met his first romantic interest 'Ann Rutledge', in New Salem. They were in a relationship by 1835, but not formally engaged. Ann Rutledge died on 25 August 1835, most likely of typhoid.

Lincoln met his future wife 'Mary Todd' in 1839, in Springfield, Illinois and they became engaged. Todd was a high-spirited, well-educated woman from a distinguished Kentucky family. Her father 'Robert Smith Todd', was a wealthy lawyer and businessman in Lexington, Kentucky. Lincoln married to Mary Todd on 04 November 1842, in Springfield mansion. The couple bought a house in Springfield near his law office, in 1844. All though Lincoln's work regularly kept him away from home, but he was a very caring husband. Mary kept house with the help of a hired servant and a relative.

Their sons death effected both parents. Lincoln suffered from "melancholy" and later in life, Mary struggled with the stresses of losing her husband and sons.

Abraham Lincoln was assassinated on 14 April 1865, by famous actor and Confederate sympathizer John Wilkes Booth at Ford's Theatre in Washington, D.C. Lincoln was in a coma for nine hours before dying the next morning.

"The best way to predict your future is to create it."