Ratan Naval Tata is an Indian industrialist, investor, philanthropist, and the former chairman of Tata Sons and was also chairman of Tata Group, from 1990 to 2012, and again, as interim chairman, from October 2016 until February 2017. He won two of the highest civilian awards in India, the Padma Bhushan in 2000 and the Padma Vibhushan in 2008. He is also the head of his charitable works. 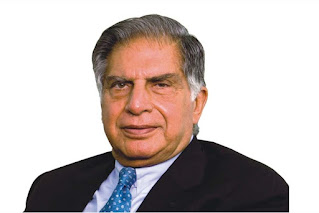 Ratan Naval Tata was born on 28 December 1937, in Bombay, in British raj, India to Naval Tata and Sons. Ratan's maternal grandmother had been the sister of Hirabai Tata (wife of group founder Jamsetji Tata). His biological grandfather, Hormusji Tata, had belonged to the broader Tata family; therefore Ratan was a Tata by birth. In 1948, Ratan's Parents Naval and Sonoo separated when Ratan was 10, After his parents separated, Ratan and his half-brother, Noel Tata (from Naval Tata's second marriage with Simone Tata), were brought up by their grandmother. He was brought up in a wealthy, famous Parsi family, who'd been in business since the British rule in India.

For his education, Ratan attended Campion school, till 8th class, followed by cathedral school and then John Connon school. He graduated from Cornell University in 1959 with a degree in Architecture and Structural Engineering. He continued his education with a seven-week advanced management program at Harvard business school in 1975. He was in the Alpha Sigma Phi fraternity, a prestigious club in the college.

Ratan Tata's career was started in 1962, when he returned after completing his graduation, he joined the family business. He even turned down a job offer from IBM. As a very young child, Ratan was always interested in Cars and their functioning and soon he started working as an ordinary employee at Tata Steel. His job was to shovel stones and work with the furnaces. it was a difficult task, but he gained knowledge and respect for his family business.

During the 1970s, Ratan was promoted to management and he achieved initial success by turning Group company National Radio and Electronics (NELCO) around, only to see it collapse during an economic slowdown. Ratan worked as a blue-collar employee till 1971. his hard work, he was promoted to the position of director. During this period, the national radio and electronics company was in a terrible state. however, soon after Ratan Tata joined the company, he made remarkable progress.

In 1977 he moved to Empress Mills, which is a part of the Tata group. he came up with a plan to make the mill business profitable. however, other Tata executives rejected it. soon the mill was shut down. so Ratan was moved to Tata industries. J. R. D. Tata stepped down as chairman of Tata Sons in 1991 naming Ratan his successor and in the same year, Ratan became the new chairman of the Tata group of companies. many people questioned his ability to run the business, However, he succeeded and improved the financial state of Tata industries.

During the 21 years, because of his hard work, Tata group's revenues grew over 40 times, and profit, over 50 times. He boldly got Tata Tea to acquire Tetley, Tata Motors to acquire Jaguar Land Rover, and Tata Steel to acquire Corus All this turned Tata from a largely India-centric group into a worldwide business. Ratan Tata became more and more famous when he introduced the world's cheapest car, the Tata Nano, in 2008.

On his 75th birthday, he resigned from the Post of chairman of the Tata group. although he still keeps an eye on the new Business and actively takes part in the decisions. Tata is also a member of the advisory board of Mitsubishi Corporation, JP Morgan Chase, the American international group, and Booz Allen Hamilton.

Ratan Tata put his handwork and determination to use for charities as well. most of his shares are forwarded to charities. one of his primary goals is to improve the quality of life for Indians. he became a member of the prime minister's Council on Trade and industry. he served on the advisory board of the RAND Center for Asia Pacific policy. he is also an active participant in India's AIDS program.

Tata was called India's most respected business leader by Forbes. the Indian government requested Tata to save the airline air India from sinking. Tata even successfully managed to make Air India profitable.

Ratan Tata never got married. He is a very private person and lives a low-profile lifestyle. He lives in a simple house in Mumbai and drives around In a Tata sedan. Ratan Tata once stated that he loved one girl in Los Angeles while working there. As his family member was ill, he had to return to India but the parents of the girl didn't allow her to come to India with Tata.

Thus Tata stood by his commitment and never married. He played a major role in raising the standard of living of the common man in India. Ratan Tata has made his country incredibly proud. With a net worth of $291 billion, Tata's profile has been ranked on Forbes at the 61st spot- as of November 2010. At present time Ratan Tata's net worth is US$ 1 billion.