Thomas Alva Edison was an American inventor. He is popularly known for inventing the electric bulb and phonograph. He was the person who established the first industrial research laboratory. He developed devices in the fields of mass communication, electric power generation, sound recording, and motion pictures. He is credited for helping to build America's economy during the Industrial Revolution. 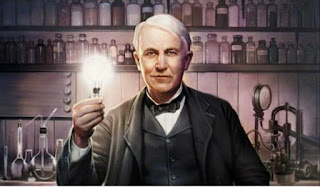 Edison was born on 11 February 1847, in Milan, Ohio. His father Samuel Ogden Edison Jr. was an exiled political activist from Canada, while his mother Nancy Matthews Elliott was an accomplished school teacher. He was the seventh child of Samuel and Nancy Edison. His mother was a major influence in Edison’s early life. In 1854, Edison’s family moved to Port Huron, Michigan.

In Michigan, Edison attended public school for a few months, but soon his mother pulled him from school and taught him at home. Because of an early bout with scarlet fever and ear infections, Edison developed hearing problems at the age of 12. As Edison get older, he became completely deaf in one ear and barely heard in the other, but Edison believed his hearing loss allowed him to avoid distraction and concentrate more easily on his work. To support his work on a new telegraphy system with Charles Batchelor, Edison enrolled in a chemistry course at The Cooper Union for the Advancement of Science and Art.

At the age of 12, Edison convinced his parents to let him sell newspapers, candy, and vegetables to passengers along the Grand Trunk Railroad line. The up-to-date articles were a hit with passengers and soon he began publishing his own small newspaper, called "the Grand Trunk Herald". He turned a $50-a-week profit by age 13. While Edison worked for the railroad, he saved a 3-year-old girl Jimmie MacKenzie, and the child’s grateful father rewarded Edison by teaching him to operate a telegraph.

Edison obtained the exclusive right to sell newspapers on the road and with the aid of four assistants, he set in type and printed the Grand Trunk Herald, which he sold with his other papers. At age 19, in 1866, Edison moved to Louisville, Kentucky, and worked for The Associated Press. The night shift allowed him to spend most of his time reading and experimenting. ex In 1868, Edison returned home to find his beloved mother was falling into mental illness and his father was out of work.

In 1887, Edison built an industrial research laboratory in West Orange, New Jersey, which served as the primary research laboratory for the Edison lighting companies. At age of 22 years old, Edison moved to New York City in 1869 and developed his first invention 'Universal Stock Printer' which synchronized several stock tickers' transactions. This invention of Edison impressed The Gold and Stock Telegraph Company and they paid him $40,000 for the rights of the device.

During his lifetime Edison received 1,093 U.S. patents and 2,332 patents worldwide which are responsible for every item that uses electricity as well as concrete in commercial buildings. On 13 October 1868, at the age of 21, Edison executed his first patent for his Electrographic Vote-Recorder. He was the person who created the motion picture industry, the X-ray machine, the recording industry, and the tattoo pen.

A Tinfoil Phonograph was Thomas Edison’s first great invention. He invented the Phonograph in 1877, although Alexander Graham Bell's Volta Laboratory made several improvements to the Phonograph. Edison's experiment was based on tin-coated cylinders with two needles: one for recording sound, and another for playback. It is a device for the mechanical and analog recording and reproduction of sound. Edison's first words spoken into the phonograph's mouthpiece were, "Mary had a little lamb". The Phonograph was used by the U.S. Army to bring music to the troops overseas during World War I and in this period, the Phonograph brought Edison international fame.

Edison had built his first high resistance, incandescent electric light, by January 1879, at his laboratory in Menlo Park, New Jersey. Edison used lower current electricity, a small carbonized filament, and an improved vacuum inside the globe and was able to produce a reliable, long-lasting source of light. It worked by passing electricity through a thin platinum filament in the glass vacuum bulb, which delayed the filament from melting.

In 1874, Edison developed The Quadruplex telegraph. This device is a type of electrical telegraph which allows a total of four separate signals to be transmitted and received on a single wire at the same time. In the same year 1874, Edison sold the rights of the device to Western Union for the sum of $10,000.

By 1892 Edison with his employer William Kennedy Dickson invented a motion the picture camera and a peephole viewing device called the Kinetoscope or peep-hole viewer on 23 April 1896, Edison became the first person to project a motion picture, holding the world's first motion picture screening at Koster & Bial's Music Hall in New York City.

Edison received many Awards in his lifetime and posthumously, for his inventions and lifetime achievements. Some of his awards lists are as follows:

Thomas Alva Edison married 16-year-old Mary Stilwell, on 25 December 1871. Mary Stilwell was an employee at one of his businesses and they met two months before their wedding. Mary and Edison had three children together. Their first child 'Marion Estelle Edison' was born on 18 February 1873 and was nicknamed "Dot". Mary gave birth to Edison's second child 'Thomas Alva Edison Jr.' on 10 January 1876, nicknamed "Dash". Their third child 'William Leslie Edison' arrived on 03 October 1878. William became a graduate of the Sheffield Scientific School at Yale, in 1900 and became an invertor.

After 13 years of their married life, Mary died on 09 August 1884, at the age of 29, due to a suspected brain tumor. Two years later of Mary's death, Edison at the age of 39, married the 20-year-old Mina Miller in Akron, Ohio, on 24 February 1886. Mina Miller was the daughter of the inventor and a benefactor of Methodist charities, Lewis Miller. They also had three children together, namely - Madeleine Edison born on 31 May 1888, Charles Edison born on 03 August 1890, Theodore Miller Edison born on 10 July 1898. Edison's daughter, Madeleine Edison married John Eyre Sloane.

Edison's son Charles Edison became an American politician, businessman, inventor, and animal behaviorist and served as the Assistant and then United States Secretary of the Navy and the 42nd governor of New Jersey. Theodore Miller Edison became an American businessman, inventor, and environmentalist. Thomas Alva Edison's second wife outlived him dying on 24 August 1947.

Thomas Alva Edison was suffering from diabetes and because of its complications, he died on 18 October 1931, at the age of 84, in his home, Glenmont, in Llewellyn Park, in West Orange, New Jersey. Edison was the most respectful inventor of his time and hence at the time of his death, many communities and corporations throughout the world turned off their electrical power to commemorate his passing.

"Our greatest weakness lies in giving up. The most certain way to succeed is always to try just one more time".