Lionel Andres Messi is a professional footballer. He is one of the top richest players in the world. He started his career in Barcelona. Messi is known as the greatest player in the world. He plays as forward and captains both types. He plays for Argentina's national football team and the Spanish club Barcelona. In 2012, he set a record for most goals in a calendar year. He scored 700 goals for the club and Argentina. In 2019, he won his sixth European Ballon d'Or award. 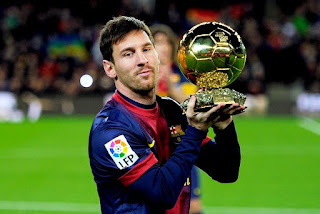 Lionel Messi was born on 24 June 1987, in Rosario, Argentina. He is one of the four children of his parents, Jorge Messi and Celia Cuccittini. His father, Jorge Messi was a steel factory manager, and his wife Celia Cuccittini worked in a magnet manufacturing workshop. Messi's family always loved football games, caused of this Lionel also developed an interest in football from an early age. In his childhood, Messi started playing football constantly with his elder brothers, Matias and Rodrigo, and with his cousins, Emanuel and Maximiliano.

Later on, both of his cousin's brothers became professional footballers. When he was about four years, his father send him to the local club Grandoli and trained him as a coach. At the age of six, Messi joined the Rosario club and he was recruited to join the youth system of Newell's Old Boys, a Rosario-based club when he was eight years old. At the age of ten years, Messi started suffering from a hormone deficiency that restricted his growth. His parents decided on a regimen of nightly growth-hormone injections for their son, but soon it was proved that it is impossible for them to pay for such high-cost injections for their child.

Messi studied in Las Heras Elementary school, Argentina, and never joined a college. At the age of 13, his parent's problem was solved, when Messi was offered the chance to train at soccer powerhouse FC Barcelona's youth academy, La Masia, and the team promised to have his medical bills covered by the team. He always continued to develop his soccer skills and his height (170m), combined with his speed and relentless attacking style, played a role in his goal.

Messi signed to FC Barcelona at the age of 13 and he only plays for this domestic team. He wears no. 30 for the club. Messi made his first appearance in the team, when he was 16 years old, when he put himself in the record books on 01 May 2005, as the youngest player to ever score a goal for the franchise. Messi has an important role in the success of the FC Barcelona team. His most notable move was in 2009 when FC Barcelona captured the Champions League, La Liga, and Spanish Super Cup titles.

In early March 2012, he became the first player to score five goals in a Champions League match and after a few weeks, he surpassed Cesar Rodriguez's club record of 232 goals to become Barcelona's all-time leading scorer. Messi recently joined French Club Paris Saint Germain, On 10 August 10, 2021, and made his debut for the club on 29 August 2021.

Messi signed up with Argentina, in August 2005. He wears no. 10 for the national team. In the same year, by scoring on a pair of penalty kicks to propel the team over Nigeria, he led Argentina to the title in the under-20 World Cup. In 2009, after two consecutive runner-up finishes, he took his first Ballon d'Or award (FIFA "World Player of the Year" honor). He won his next Ballon d'Or awards in the years 2010, 2011, 2012, and 2015 and by winning the award for the sixth time in 2019, he made a record winning the award for the sixth time.

He is the first player to win six European golden shoes. Lionel Messi won many awards now some of these awards are:

Lionel Messi married his longtime girlfriend, Antonela Roccuzzo on 30 June 2017, who is the cousin of his best friend Lucas Scaglia, a fellow soccer player. Their marriage was held at a luxury hotel in Rosario, where a number of fellow star soccer players and famous Colombian pop star Shakira were present. The couple has three children together. Their first child was born in November 2012, named Thiago. Mateo, their second child was born in September 2015 and their third child Ciro was born in March 2018.

Net Worth and Charity

Lionel Messi is one of the richest players in the World and his net worth is about 600 million $. To provide opportunities and support for disadvantaged youths, Messi formed the "Leo Messi Foundation" in 2007. For his efforts, UNICEF named him a goodwill ambassador, with a focus on fighting for children's rights across the world, in early 2010.

You have to fight to reach your dream, you have to sacrifice and work hard for it.