Cristiano Ronaldo dos Santos Aveiro is a Portuguese professional footballer. He is the captain of the Portugal national team and also plays as a forward for Premier League club Manchester United. He is considered the best player in the world and is regarded as one of the greatest players of all time. Ronaldo has won five Ballon d'Or awards and four European Golden Shoes, which is the highest by a European player. 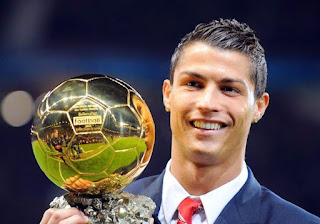 He won a total of 32 trophies in his career and he is also one of the few players to have made over 1,100 professional career appearances and has scored over 790 official senior career goals; for club and country. He is the best player in Portugal.

Cristiano Ronaldo was born on 05 February 1985, in Funchal, Madeira, Portugal. He is the youngest child of his parents José Dinis Aveiro and Maria Dolores dos Santos. His father named him after Ronald Reagan, which was one of Aveiro's favorite actors. Ronaldo grew up with his three older siblings (brother) Hugo Aveiro, and two older sisters, Elma Aveiro and Liliana Cátia Aveiro "Katia". Ronaldo grew up in an impoverished Catholic home, sharing a room with all his siblings.

His father was addicted to alcohol and due to their poverty his mother was forced to abort Ronaldo due to poverty, but her doctor refused to perform the procedure. Ronaldo's early life was very hard. Due to his father's alcoholism, his mother worked as a cook and cleaning person, to feed the children and maintain some financial stability.

In his childhood, Ronaldo played for Andorinha from 1992 to 1995 and later after spent two years with Nacional. At the age of 12 years, In 1997, he went on a three-day trial with Sporting CP, and he signed it with a fee of £1,500. In 2005, his father died due to alcohol-related kidney disease and his mother struggled with breast cancer in 2007. This time period was very hard for Ronaldo since he was very close to his father. As he grew up his talent become more and more perfect.

In 2001, at the age of 16 years, Manchester United paid Ronaldo, more than £12 million to sign him. £12 million was a record fee for a player of his age. By his playing style and skills, he made such an impression that a number of United players asked their manager to try and sign up Ronaldo.

In the 2004 FA Cup final, he scored the team's first three goals which helped them capture the championship. In 2007, Ronaldo signed a £31 million contract for five-year. With his skills in soccer, Ronaldo won the FIFA World Player of the Year honor for 2008 and helped steer the Manchester United team to win three premier league titles.

In 2009, a Spanish soccer club, "Real Madrid" agreed to pay Manchester United a record $131 million for the chance to sign Ronaldo. During this period, Ronaldo went to make up an impressive list of individual honors and team trophies. He won his fourth Ballon d'Or award as the sport's player of the year, in December 2016, by beating out his rival FC Barcelona's Lionel Messi. In 2016, Ronaldo claimed his fifth Ballon d'Or and made a tie with the mark held by Lionel Messi.

In July 2018, Ronaldo signed with Italian Serie A club Juventus. This club paid his old Spanish club an amount of $140 million transfer fee. His debut season was very successful with Juventus and he scored 10 times in his first 14 games. Ronaldo led the Juventus club to its eighth consecutive Serie A title and thereafter in May 2019, the cup named him the league's MVP.

Back to Manchester United

On 27 August 2021, Manchester United made an announcement that they had reached an agreement with Juventus to re-sign Ronaldo, subject to an agreement of personal terms, visa, and medical, with a transfer fee, recorded £12.85 million initially, with a two-year contract plus an optional year.

In 2001, Ronaldo began his international career with Portugal under-15. During his international youth career, Ronaldo represented the Portugal national team under-15, under-17, under-20, under-21, and under-23 national sides. At the age of 18, Ronaldo made his first senior appearance for Portugal on 20 August 2003, in a 1–0 win over Kazakhstan.

Ronaldo became the captain of Portugal's national team in 2007. As his national team's captain, Ronaldo led Portugal to the European Championship final against France On 10 July 2016.

Position: He plays in a forward position and his squad number is 7.

Cristiano Ronaldo won many awards in individuals which are listed as-

Cristiano Ronaldo’s first child was born to a former girlfriend on 17 June 2010 who's name is Cristiano Jr. He told that he has full custody of his child and according to an agreement with his child's mother, he would not be publicly revealing the identity of the mother Ronaldo is dating Georgina Rodriguez, who was a former shop assistant.

Via surrogacy, the couple had twins, daughter Eva and son Mateo, born on 8 June 2017 in the United States. On 12 November 2017, Georgina gave birth to Ronaldo's third-fourth child daughter Martina. In October 2021, Ronaldo announced the family would be expecting a second pair of twins.

Cristiano Ronaldo surpassed $1billion in career earnings and as of October 2021 has a net worth of $500 million, according to news reports.

Believe in yourself you are braver than you think, more talented than you know, and capable of more than you imagine.