Sir Isaac Newton was a French German scientist. Newton was a physicist, astronomer, theologian, English mathematician and author. He gave principles of modern physics, including the laws of motion and is credited as one of the great minds of the 17th-century Scientific Revolution. 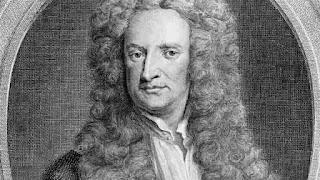 Isaac Newton was born on 04 January 1643 (old-style 25 December 1642) in woolsthorpe, Colsterworth, Lincolnshire, England. He was the only child of his parents Isaac and Hannah Ayscough Newton. When Newton was born he was very weak and thus was not expected to survive. His father Isaac was a prosperous local farmer and was died three months before Newton's birth.

When Newton was about three, his mother, Hannah Ayscough Newton, married a minister, Barnabas Smith, and went to live with him, leaving young Newton with his motherly grandmother. Newton doesn't like his stepfather. His mother had three children from her second marriage. When Newton was twelve years old his stepfather passed away.

Newton enrolled in king's school in Grantham, Lincolnshire. When his stepfather died, his mother pulled him out of school to make him a farmer because she thought that Newton should manage her now considerable property. Since He could not bring himself to concentrate on farming, he was again sent to a grammar school in Grantham. On the recommendation of his uncle, "Rev William Ayscough" Newton was admitted to Trinity College, Cambridge. Newton was ready to matriculate, By June 1661, but he was older than the other undergraduates because of his interrupted education.

During the first three years at Cambridge, Newton was taught the standard curriculum but was fascinated with the more advanced science. Newton got his scholarship in 1664, which was for four years until he could complete his master's. He discovered the generalized "binomial theorem" in 1665 and began to develop calculus. In August 1665, Newton get his BA degree, and soon after Cambridge University temporarily closed as a precaution against the Great Plague. Newton returned to Cambridge, in April 1667 and was elected as a fellow of Trinity, in October 1667.

Newton discovered theories and concepts in the field of optics, motion, and mathematics.

By his 18 months of effortless work, Newton published "Philosophiae Naturalis Principia Mathematica" (Mathematical Principles of Natural Philosophy), which is often known as Principia, in 1687. Principia is said to be the single most influential book on physics. Principia contains information on nearly all of the essential concepts of physics except energy and gives an exact quantitative description of bodies in motion, with three basic laws of motion:

"A body continues in its state of rest, or in uniform motion in a straight line unless acted upon by an external force".

"Force acted upon a body is equal to mass times acceleration, and a change in motion is proportional to the force applied".

"For every action, there is an equal and opposite reaction".

Newton came back home, between 1665 and 1667, because the university was temporarily closed due to the great plague. This time is considered the time when Newton first experienced his famous inspiration of gravity with a falling apple. It is not clear whether Apple hit his head or it falls all the ground. This incident lead Newton, to wonder why this apple fell straight down and not at, and thereafter Newton's explored the laws of motion and gravity.

Newton in 1668, designed and constructed a reflecting telescope. Newton theorized that white light is a composite of all colors of the spectrum, and that light was composed of particles. He used it to study optics and to prove his theory of light and color.

Sir Isaac Newton has a very important role in the field of science, especially in physics. He also discovered the laws and formulas of mathematics. He also wrote a book about mathematical principles of natural philosophy. Some important discoveries and inventions of Newton are :

Newton was elected president of the Royal Society upon Robert Hooke's death, in 1703 and held this position up to 1727. In 1705, in a dispute, German mathematician Gottfried Leibniz publicly accused Newton by claiming he had discovered infinitesimal calculus several years before the publication of Principia. For the investigation of this matter, the Royal Society appointed a committee in 1712 and this committee concluded Newton's priority over the discovery.

In the last years of his life, Newton lived with his niece, Catherine Barton, and her husband John Conduitt Cranbury Park, near Winchester, England. At this time, Newton became one of the most famous men in Europe. His discoveries were unchallenged. He also had become healthy, by investing his sizable income wisely.

When Newton turned 80, he started having digestive problems. In March 1727, Newton experienced a strong pain in his abdomen and blacked out. He died at the age of 84, on 31 March 1727.

“Gravity explains the motions of the planets, but it cannot explain who sets the planets in motion.”