Bill Gates is an American Entrepreneur, software developer, author, philanthropist, and businessman. He founded the world's largest software business, Microsoft with Paul Allen. He is considered one of the best-known entrepreneurs of the microcomputer revolution of the 1970s and 80s. In February 2014, Bill announced that he was stepping down as Microsoft's chairman to focus on charitable work at his foundation, The "Bill and Melinda Gates Foundation". 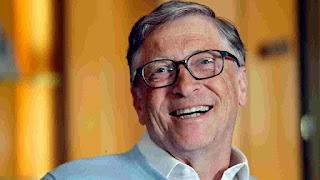 Bill Gates was born on October 28, 1955, in Seattle, Washington. His full name is William Henry Gates III. Gates grew up in an upper-middle-class family. He was one of the three children of his parents, William H. Gates Sr. and Mary Maxwell Gates, with his two sisters, Kristianne and Libby. All three children were encouraged by their parents, to be competitive and strive for excellence.

Gates' father William H. Gates Sr. was a prominent lawyer, and his mother served on the board of directors for First Interstate Banc System, the United Way of America, and (IBM) International Business Machines. His mother was a school teacher also.

Gates was good in their studies and was gluttonous. When Gates was about 11, Gates' parents began to have concerns about his behavior. He was doing well in school. At the age of 13, gates' parents enrolled him at Seattle's exclusive preparatory Lakeside School. Here, he wrote his first software program. He gave a good performance in nearly all his subjects and was excellent in math and science. He was doing very well in drama and English also.

When gates were in the eighth grade, the Mother's Club at the school used proceeds from Lakeside School's rummage sale to buy a Teletype Model 33 ASR terminal and a block of computer time on a (GE) General Electric computer for the students. Here bill gets interested in working on the computer. He wrote his first computer program on this machine and implemented tic-tac-toe that allowed users to play games against the computer.

Bill Gates graduated from Lakeside school, in 1973. When Gates was about 17, he formed a venture with Allen, to make traffic counters called Traf-O-Data, based on the Intel 8008 processor. He was a national scholar since he scored 1590 out of 1600 on the college Scholastic Aptitude Tests (SAT). In last 1973, Bill enrolled at Harvard University with the original thinking of a career in law because of his parent's discomfort. He dropped out of college in 1975 to mind his business, Microsoft, with Paul Allen.

Bill Gates along with Paul Allen launched Microsoft, on 04 April 1975, in Albuquerque, New Mexico, United States. For which Bill was standing as CEO and Paul Allen as Vice President. On 20 November 1985, Microsoft and Gates launched their first retail version of Microsoft Windows, which attracted customers with its simplicity and ease of use.

Apple and Microsoft shared many of their early innovations. Apple, in 1981, invited Microsoft to help develop software for Macintosh computers. Some of the developers were involved in both Microsoft development and the development of Microsoft applications for Macintosh. This fact was for the knowledge that, 'Microsoft developed Windows, a system that used a mouse to drive a graphic interface, displaying text and images on the screen' was greatly different from the text-and-keyboard driven MS-DOS system where all text formatting showed on the screen as code and not what actually would be printed.

Bill immediately recognized this bluster that this kind of software might be dangerous for MS-DOS and Microsoft overall. Bill Gates announced in a campaign that a new Microsoft operating system was about to be developed that would use a graphic interface. The announcement was a deception, in a manner that Microsoft had no such program under development.

This was a marketing strategy so that the computer markets, would wait for Windows software rather than change to a new system. In November 1985, Microsoft launched Windows. Visually Windows system looked very similar to the Macintosh system of Apple Computer Corporation.

Bill Gates stepped down from the day-to-day operations of Microsoft. He turned his position as CEO to his college friend Steve Ballmer, who had worked with Microsoft since 1980. Gates announced he was transitioning himself from full-time work at Microsoft, in 2006. His last full day at Microsoft was 27 June 2008.

Bill was one of the three children of his parents, William H. Gates Sr. and Mary Maxwell Gates. Bill, in 1987, met a Microsoft production manager, Melinda gates who was 23. Melinda caught his eyes. On 1 January 1994, Gates married Melinda French, in Hawaii.

After a few months of their marriage, Bill's mother passed away because of breast cancer. After this, they took some time off in 1995 to travel and get a new perspective on life. Bill along with Melinda, has done many charitable works. Bill and Melinda established the William H. Gates Foundation, in 1996.

This foundation was dedicated to supporting education, world health, and investment in low-income communities around the world. Gates along with his wife Melinda a contribution of USD$ 28 billion, and founded "The Bill and Melinda Gates Foundation" in 2000. This foundation works to help people to lead healthy and productive lives.

Their first daughter, Jennifer was born in 1996, and their son, Rory was born in 1999. Phoebe was their second daughter, who arrived in 2002. Their house is located on the shore of Lake Washington.

Bill and Melinda get divorced in May 2021. Bill gates donated much property to trusts. Bill gates have an interest in reading books. Vaclav Smil, who is a Canadian academic, is Bill's favorite author and his favorite book is deep dives.

Bill was honored with "The Presidential Medal of Freedom" in 2016, by the president of the United, because of his work for world peace and the national interests of the United States. Bill and Melinda gates foundation, in 2003, started their work in India to prevent HIV/AIDS, and they were honored by Padma Bhushan in 2015.

"If you can't make it good, at least make it look good".